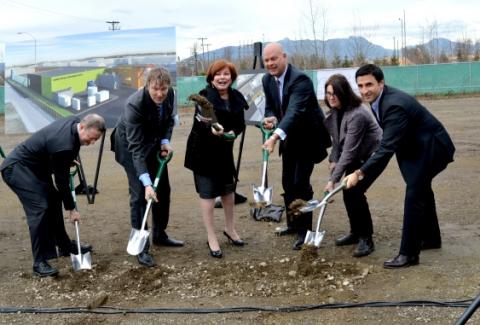 PORT KELLS — The City of Surrey held a groundbreaking ceremony for its planned biofuel processing facility on Friday.

Set to be completed in 2017, the facility will convert the city's kitchen and yard waste collected at curbside - and commercial waste across the region - into renewable natural gas. It will then be used to power the city's fleet of waste collection vehicles and district energy system. The site will also produce a compost product to be used for landscaping and agricultural purposes, and there will be room in the building to do school tours of the site.

The city says the organic biofuel facility will be the first fully integrated, closed-loop waste management system in North America, which will be able to process 115,000 metric tonnes of organic waste per year. It's hoped the site will help Metro Vancouver achieve its regional 70 per cent waste diversion target.

The site is being developed as a public-private partnership. Under this model, the city has chosen a private partner - Orgaworld - to design, build, finance, operate and maintain the facility through a 25-year agreement.

Orgaworld is a Dutch-based company specializing in organic waste recycling with facilities in the Netherlands, the United Kingdom and Canada.

Henk Kaskens, founding and managing director of the company, said together with Surrey the company has "designed an innovative solution that will prove to be world class. We believe the City of Surrey's progressive vision will set a new standard for organic waste management processing sites in North America."

According to the city, the project will create more than 15 full-time, long-term jobs.

So what's the price tag for this state-of-the-art facility?

In 2012, the federal government approved the city's application to the P3 Canada Fund, where it agreed to contribute up to 25 per cent - or up to $16.9 million - for the capital cost of the project.

"As far as the actual cost, we actually came in under," Costanzo said. "We're working out, currently, with Orgaworld how to provide that number because the number itself, because there's a competition, it creates an unfair advantage for the proponents. The secret is in the cost of the facility.... The disclosure of the amount, we're working that out through Freedom of Information because there's a process we have to go through to ensure we're not disclosing the proprietary information. The bottom line is, our assessment is that this facility is going to be delivered with no impact to the taxpayer."

The biofuel facility will be developed as a Public-Private Partnership. Under this model, the City will choose a private partner to design, build, finance, operate and maintain the facility in a long-term agreement. As an added financial benefit, in September 2012, the Government of Canada announced that it had approved the City of Surrey’s application to the P3 Canada Fund where it will contribute up to 25% (or up to $16.9 million) of the capital cost of the future biofuel facility.

Surrey received a QUEST Community Energy Builder Award in 2013 for the planned site.

To achieve these targets, address climate change, and keep money in your pocket, we're working with you and your community to reduce emissions.